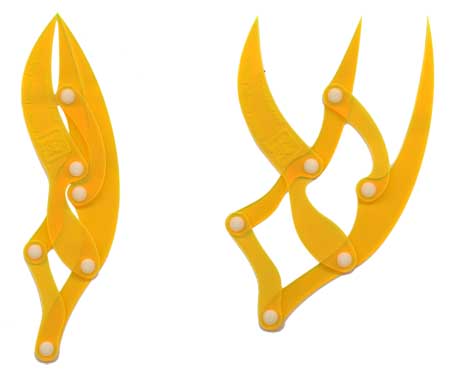 A comment on one of my recent blog posts asked a question about how to use the Golden Gauge Calipers and the Golden Ratio in choosing borders for quilts.

For those of you not familiar with the Golden Ratio or the Golden Gauge Calipers that I designed see these blog posts. Or just search “Golden Ratio” on the internet and be prepared for a wealth of information.

The Golden Ratio is thought to be the perfect proportion for all sorts of art and even in nature.  The ratio is 1 to 1.618 or 1 to .618. The calipers open exactly to that measurement and save the math. I’ll show you here how I planned the border for Wings.

I wanted the first border to be the same size as the frame around the hexagons. That frame is ¾ inches wide. But how wide should the second border be?

I placed the calipers on the first border with the small opening across the ¾ inch. The wider opening gave me the size that would be a good proportion for the next border.  That measurement was 1.21 inches. I just rounded up to 1 ¼ inches.

Here is the image of both variations of the border. I felt that the design was so bold that the wider one looked better. But in either case, there is a pleasing proportion between the widths of the borders, no matter which one you use.

Give it a try!

7 thoughts on “Golden Ratio and Proportions for Borders”