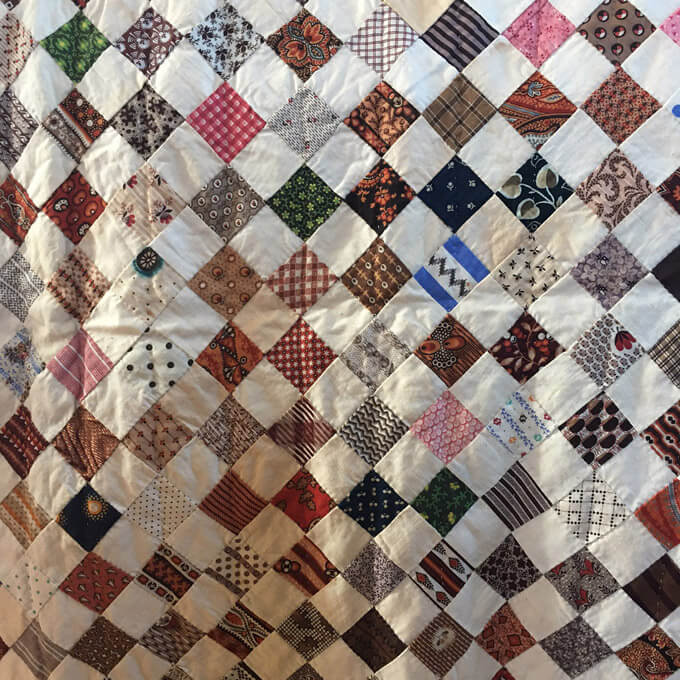 We have had a lot of interest in the last blog post about Charm Quilts. In general a charm quilt, made with one shape, is where each piece is cut from a different fabric. However in my research I have seen ones where all the different patches are alternated with a common fabric. I still call that a charm quilt.

Here was an interesting question from one of our readers, Nancy B.

“Jinny, must every square be different for it to be called “charm”? I ask because I have been making 5 “ squares of 5 rows of 5 one inch squares for several years and think of it as a “journal quilt”. I had read about the idea of using small scraps from each quilt as I made it and then assembling them into a larger quilt as a kind of way to keep a “journal” of the quilts I as I made them. But although I have 100s, some of the small squares repeat twice within a block to create a kind of symmetry around the center square or the opposite corners. I am sure to have over a 1000 fabrics used in total but some squares are duplicates. Shall I call it a Journal Quilt or is it a kind of Charm Quilt? Thanks for your opinion!”

Your quilt sounds like it is quite a journey. I love the idea and I love your name of “Journal Quilt”. But if a lot of pieces are duplicated I probably wouldn’t call it a charm quilt. That said, sometimes I have found that there is one piece in the quilt that has been duplicated, perhaps by design. I often wondered about that until I heard the following story. Someone who inherited a Charm Quilt that her grandmother made, told about having that quilt on her bed during a long childhood illness. She said, “I finally found the two patches alike, a game we used to play as children.”

I have an antique charm quilt made with triangles (shown above). There are 16 block units that make up the quilt. When I first saw this I figured that it was not a charm quilt because I quickly realized that the triangles in the center of each unit were yellow and red, and most of them were cut from the same fabrics. Also the corner triangles of each of each block also had repeats. Two opposite corners were always green and the other two corners were either yellow or red. On closer examination, I discovered that those center and corner triangles were the only fabrics that were used multiple times. All the other pieces in the quilt (except for the border fabrics) were cut from different fabrics. There was a lot of planning that went into this quilt. I still call it a charm quilt because it was obviously the intention of the maker to create a quilt where the red and yellow centers of the blocks and the corner pieces were the “unifiers” of all of the different fabrics.

In each of the 16 blocks in the quilt, there are 32 triangles for a total of 512 triangles. However, 384 triangles are cut from different fabrics. I call this a charm quilt because it appears it was the intension of the maker to showcase all of those different fabrics. One of the block units is shown in the image below.

I must say, that in the charm quilt I made, I have a piece that was duplicated. It was not my intention to have those two pieces from the same fabric, but with so many different pieces it is hard to not repeat one. I only made the discovery after the quilt was finished. My niece and nephew who were five and seven at the time were staying with me for a few days and it was raining and they were bored. I spread out my charm quilt and told them to see if there were any pieces that were duplicated. It did not take them longer than a half an hour to find two pieces the same. I still call it a charm quilt even though inadvertently I used one fabric twice.

In my next blog post, which will come out in early December, I will show you some other ways simple squares can be put together to create interesting quilts. I will also give you some other shapes to download in case you want to create a quilt with a shape other than a square.