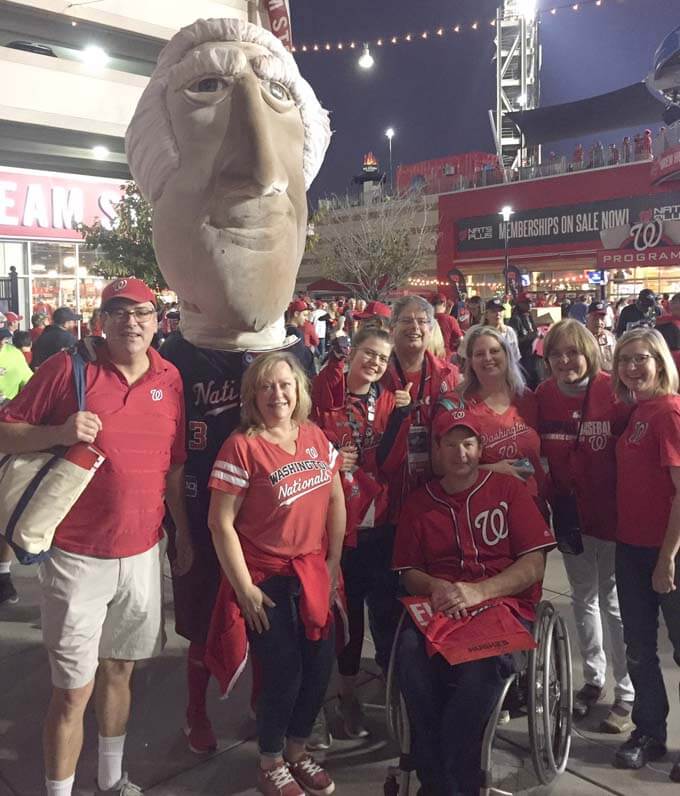 It seems like the last month has been a whirlwind. I can finally take a deep breath. Sadly, the baseball season is finished but what an amazing, or should I say “Astronomical” finish it was with the Nats winning the World Series. Being an avid Washington Nationals fan, I went to many games including several of the post-season games. In addition to that excitement, our Quilters’ Quest Shop Hop is over, I have just returned from Quilt Market in Houston and now I can play catch up.

For those of you who have asked, we are working on a revision of our Open Book quilt pattern that we gave out during the Quest. (See last months’ blog.) The new pattern will be geared to a scrap quilt. In my mind, for a quilt like this, the more fabrics the better. I will let you know as soon as the new pattern is ready and give you some suggestions for fabrics to use.

One of the exciting things on my agenda is that I have agreed to be the guest quilter on three incredible trips with Craftours over the next year and a half. Full details are not yet available but I will let you know as soon as they have been finalized. Meanwhile you might want to put a tentative mark on your calendars for a wonderful experience exploring the treasures of ancient Greece, May 9-19, 2020, or join me October 3-14, 2020 on an exotic trip to Uzbekistan where we will discover the history, textiles, traditions and crafts of the Silk Road. The third trip is an ultimate Kenya Safari expedition, January 15-23, 2021.

For those who would like to participate, I am planning a small hand sewing project for each trip based on design influences from that country. We will have a three hour workshop at the beginning of the trip and informal sewing sessions during the trip. Details will be given in advance so you do not have to bring a lot with you…after all, we need to save space in our bags for shopping! I hope you can join me on one or even all three of these exciting experiences.

Each year 10 shops from Virginia and Maryland join together during a ten day period in early November for our annual Quilters’ Quest shop hop. We plan a color scheme and each shop makes a quilt with those colors. As participants in the Quest go to each shop they can pick up a free pattern for that shop’s quilt.

Exactly two months ago I began hand-stitching Labyrinth, our Jinny Beyer Studio quilt for this year’s shop hop. I did all the sewing while watching the Washington Nationals baseball games on TV.

Along the way I have shown you bits and pieces of the quilt blocks. Now that the top is finished I want to share it with you. This year I chose a pattern that wasn’t as difficult as the ones from the past two years. Labyrinth has only straight-line sewing and no set-in seams. Even though I pieced it by hand, it is very easy to machine piece as well.

Here is a chart of the colors all the shops are working with. For Labyrinth I decided to leave out the oranges and teals and just use the blues, reds, purples and magentas.

We are also making a second quilt with only 16 blocks instead of 36. In this quilt we have left out the blues and teals and added the oranges. When it is finished we will show you the comparison. It will be fun for all of us to see the difference that one change of color will make.

It is not too late to make plans to join us for the Quest. All of the shops are planning two-day excursions by bus. Most shops still have openings. We get a lot of people from out of the area participating and hope you will too!

I was sewing the border on the quilt for this year’s Quilters’ Quest the other night while watching the Washington Nationals vs. Baltimore Orioles baseball game on television and I found myself paying more attention to the brick wall behind the batter than the player himself.

It took me back to the last Jinny Beyer Club meeting at the shop. One of the women stood up and was showing a quilt that she had hand pieced. It was beautifully done, but she was a bit apologetic, saying that she knew everything was not perfectly straight. I then had to give her my abbreviated speech on symmetry.

Pick up a leaf and look at it. At first glance, the right and left halves appear to be symmetrical but on closer observation you can see little discrepancies. It is those differences that make the leaf more interesting to look at than if was perfectly symmetrical.

Even though the human face looks the same on both sides, once again there are differences that make the face more interesting than if it was perfectly symmetrical. Look at this photo of Abraham Lincoln and the difference in how the face looks when you make the two halves exactly mirror each other. The face has now lost its character.

To me it is the same thing in quilting. Quilts that are made with strips cut and pieced together and then cut up again into blocks or triangles and made into a quilt can be lovely but there is a certain charm in a quilt made with scraps or multiple fabrics where all the blocks are not exactly the same.

The same can be true of the quilting process. Computer-guided longarms have made it much easier to finish a quilt with perfectly completed quilting designs and opened the door to many who do not have the time in their lives to finish certain projects. But if you don’t try the quilting yourself because you feel you can’t be perfect, you may be missing the joy and pride of making the quilt entirely yours.

As I studied that brick wall behind the batter, I loved the fact that bricks were not evenly spaced and perfectly symmetrical. It gave the wall character and charm, making it much more interesting that a pre-fab brick wall. The same should be true of your quilting projects. Celebrate the little idiosyncrasies, and know that is what makes your quilt unique.

Here are just a few words as I run off to visit my grandchildren.

With July now in full swing, summer has truly begun. I can’t help but feel that lazy, laid back feeling just a bit by enjoying some simple summer fun.

I recently returned from California where I visited the offices of RJR Fabrics, the company which has manufactured my fabrics for many years. I took the opportunity to combine business with pleasure.

It is no secret I am a big Washington Nationals baseball fan. Demi, head of marketing for RJR, took me to the Dodgers/Nats game.

Summer fun also involves the simple pleasures of watching all the wildlife out the window. I recently wrote about a groundhog I found up one of our trees. Happiness is sewing at my kitchen table and watching the goldfinches at the bird feeder…

…and chuckling while watching the squirrels try to get the goldfinches’ food.

With summer well upon us (at least here in the northern hemisphere), I hope you too take the opportunity for a little summer fun.