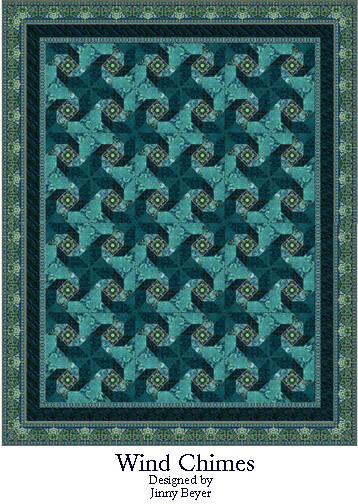 We get questions periodically from our blog or from Facebook. One came in recently from Catherine S. who said she was looking for an old tessellating pattern of mine called Wind Chimes. I looked for it in my encyclopedia of more than 4,000 pieced patterns, The Quilter’s Album of Patchwork Patterns. It wasn’t there so I realized I must have forgotten about it and failed to include it in the book. I then searched for the name on my computer and found it! I designed it in 1999.

I realized that this block was a good subject for a blog (thank you, Catherine), mainly because it illustrates how different a design can look and how you can create an interlocking or tessellating pattern from a traditional design.

First of all, the block itself is an adaptation of an old traditional block known as Windblown Square or Balkan Puzzle. I made two changes in that block to create Wind Chimes. I divided the center square into triangles and eliminated the lines shown.

Most people would color either of those two designs in a traditional way as shown below.

To get the interlocking effect, four blocks are pinwheeled with the darks coming together at the center; then these four block units repeat to form the design.

In the original quilt I did not color the center triangles light and dark but used a border print in those four triangles. It is easier than it seems to create a border print square by fussy-cutting four identical triangles from a border print fabric. Click here to see my lesson on how it’s done.

Through the years, I have taken many traditional blocks and made subtle changes to give them an entirely different look when made into a quilt. Give it a try. You’ll be amazed at what you can create.

I will be teaching a class on Designing Tessellations at the Studio next week for all of you who are interested in this fascinating technique, there are still some openings. Hope to see you there!

1 thought on “Creating a tessellating design from a traditional block.”