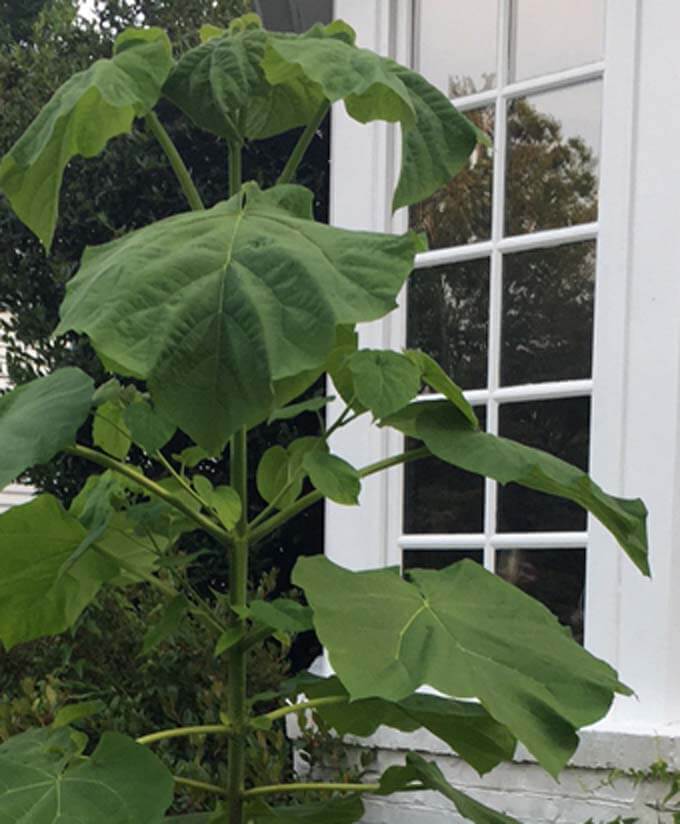 On March 16, 2020, the governor of our state issued orders to help curb the Corona-19 virus. In compliance with those orders and in the interest of the well-being of our staff and customers, I closed the brick and mortar portion of our business and went strictly to online sales. This was also two months to the day since my husband passed away.

I took a walk around my yard that day, noticing the signs of the rebirth of spring. It was a beautiful, sunny day. The hellebores were in full bloom, daffodil buds were beginning to open, and it was a good time to reflect on what was going on around me.

As I was walking up the steps to my kitchen door, a plant, right under the bay window and near the bird feeder, caught the corner of my eye. It looked like a large weed. I went back down the steps prepared to pull it up and stopped myself. If it was a weed, it was a rather more important weed. The stem was quite strong and the leaves quite large. It was about 10 inches high. We feed the birds shelled sunflower seeds and I wondered if one of those seeds had sprouted. I decided not to pull it up and see what would happen.

The plant proceeded to grow at least a foot every three weeks. By mid-June it was four feet tall.  I still thought it might be a sunflower and what a nice treat that would be for the birds once it flowered. Also, about that same time, I spotted this newly born fawn camouflaged amongst my pachysandra. I sent the photo to my grandchildren and my daughter wrote back “It won’t be so cute when it is big enough to start eating your perennials.”

On July 16, exactly four months from when I first saw the plant, it was now taller than me and halfway up my bay window. I now determined for sure that it was definitely not a sunflower. I made up my mind that it had to be Jack’s Bean Stalk, reaching up to the clouds.

Also, the fawn was now definitely big enough to enjoy my plants.

By August 16th the “bean stalk” was almost up to the gutters and the leaves were so huge some of them were as much as 25” across.

I decided to get serious and see what on earth it was. I followed my granddaughter’s advice. “Just ask Google. Google knows everything.” And sure enough, according to Wikipedia:

The tree been used for centuries for medicinal, ornamental and timber uses. It was imported to Europe in the mid 1800’s and shortly thereafter introduced to the Eastern United States.

In April or May the tree sends out beautiful purple foxglove-like fragrant flowers.

I did a little sleuthing and discovered that a neighboring farm has for years been planting the trees as a crop. I guess one of the birds at my feeder also visited the farm and brought a seed to plant in my garden.

By September 16, it was reaching towards the chimney and by October 16 it was literally at the chimney.

Now, the middle of November, my pandemic tree is rather sad looking, having dropped all its leaves. It is as though it is crying for all those lost in this “lost year.”

Paulownia Pandemic tree will be moving soon to a location where the fast-growing roots won’t destroy the foundation of our house and where it will have plenty of room to grow to its eventual height of 50-70 feet.

As I watch it go into its dormancy stage, it brings me hope that this “lost year” will be in the past and that when my tree awakens in the early spring, the world will also begin a rebirth and that we will get our lives back to some kind of normalcy in 2021.

35 thoughts on “My Pandemic Tree”