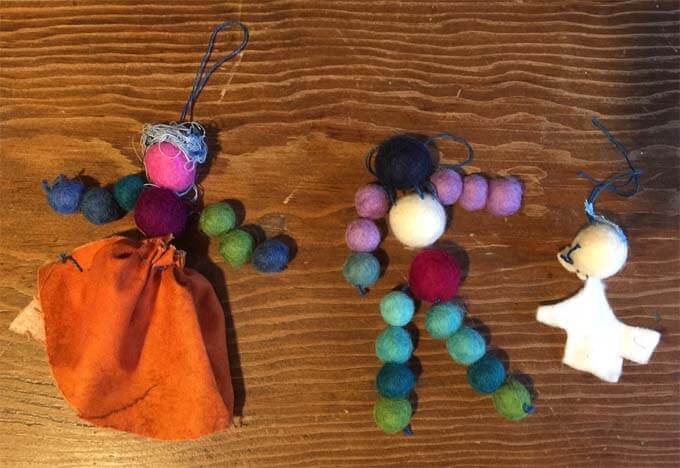 I visited my grandchildren a couple of months ago and Polly carefully showed me her Treasure Box containing all kinds of items that were going to go into the trash that she rescued for projects. There were empty tissue and paper towel rolls, an interesting button, empty spools, odd pieces of yarn, etc. She and her brother, Emmett, have amazingly creative minds and put together all kinds of creatures and art.

So in anticipation of Polly and Emmett’s visit this Thanksgiving, I started collecting items for a Treasure Box here. The box contained plastic tubes and pen holders, threads that accumulated at the shop from tearing fabric for fat quarters and kits, scissors, scotch tape, duct tape, lots of fabric scraps, felted wool balls, and so much more.

When they arrived and I told them about the box, they could hardly contain themselves and wanted to delve in right away. Of course, it had to be emptied where the activity was going on…….the kitchen table. So for a week we ate in the dining room and the kids had their on-going projects to work on in the hubbub of activity.

The first thing they went to was the fabric and they said they wanted to make Halloween costumes for next year. Emmett wants to be Darth Vader and Polly wants to be a peacock. I told them we would need larger pieces of fabric than what was in the box so we went to the shop. Emmett immediately found solid black fabric and Polly found a batik that she thought would make a perfect peacock skirt.

I decided it was time to introduce them to the sewing machine so that went on the kitchen table as well. They both caught on very quickly.

While I was showing Polly how to work the machine, unbeknownst to me, Emmett had cut a hole in the middle of the black fabric for his head, two holes for arms and found a decorative belt to go over his shoulder. He made a hat from a black file folder and my black microwave vegetable steamer and his dad helped him tape batting inside so it wouldn’t slide around his head.

Among other sewing, Polly and I made holiday napkins for her mom and dad for Christmas along with her peacock skirt. Emmett made a quilt with squares, a hat and clothes for stuffed animals and dolls. What a wonderful feeling to share my love fabric and sewing with them!

Of course, in the middle of all the activity, our washing machine died Wednesday night before Thanksgiving. We were able to get a new one Friday and the kids immediately latched on to the box it came in and spent the next several hours creating their “Time Machine”.

In the midst of all the projects, we also had cooking activities and fed and took care of the animals I borrow from a friend whenever the children come for a visit.

Needless to say I’m a bit worn out. But happily so!

10 thoughts on “The Treasure Box”