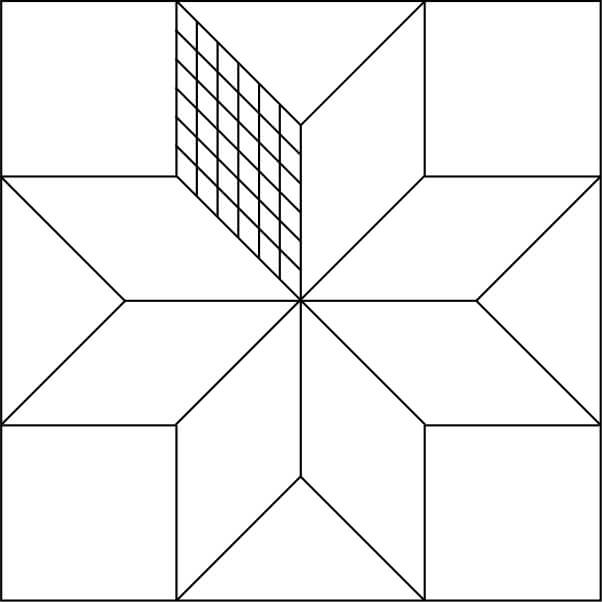 I often use fragmenting when designing quilts. The concept of fragmenting a traditional patchwork block is not new. It has been used for centuries with the traditional Lone Star design.

In the Lone Star design, each of the diamonds of a traditional eight-pointed star has been broken up into the same number of smaller diamonds.

The diamond units in a traditional eight-pointed star block (left) can be fragmented (center). We know this “fragmented” design as the Lone Star quilt. You can fragment the background squares and triangles, too. That’s what I did for my Stained Glass Star quilt!

Traditionally, each round of diamonds from the center outwards is the same fabric. I used this same idea to create the quilt, Star Sapphire. Each of the diamonds has been broken into eight divisions per side, but the coloring is different from that of a  traditional Lone Star. I treated each large diamond unit as being made up of four smaller diamonds, and then shaded the patches within each of those four diamonds to create a non-traditional effect.

In the traditional lone star design (right) the colors radiate out from the center with each round of color the same in each diamond unit. In Star Sapphire (right), I switched up the color shading to get a design with a more faceted look.

When I developed the idea of fragmenting an entire design, I still started with a traditional quilt block.  However, then I broke all the shapes in the design into smaller versions of that same shape. Each shape had the same number of divisions. In addition, when coloring the fragmented shapes, I shaded each of them from light to dark. Let’s look at a recent example.

I developed Rajasthan from a traditional design called Beginner’s Delight. Below you can see the original design, the fragmented version and finally the quilt. The larger sized quilt uses four of the blocks. And rather than fragment the central square, I opted to use a border print square. (You can learn how to do this in my Creating Border Print Squares lesson.)

The Rajasthan wall-sized quilt is really just one big block!

The larger version of Rajasthan is four blocks sewn together. A border print triangle is used in one corner so that when the quilt is assembled, you get a center medallion.

How to Fragment Your Own Block

Fragmenting is fun.  It gives you the opportunity to really play with color and shading, or simply to use lots more fabrics. When selecting a design, a simpler one will best.

To fragment the block:

With a triangle, you need a third set of lines. Sometimes I find this last set makes the shape too busy and I opt to eliminate it.

Because a triangle has three outside lines, none of which are parallel, to fully fragment the shape you need to draw three sets of lines (Triangle 3). However, you could decide to just stop at two sets of lines as in Triangle 2 and use diamond-shaped patches to fill the unit. You might also decide to remove a different set of lines as in Triangle 4: in this example, you’ll fill the shape with square and half-square triangle patches.

Shade the units from light to dark. Try shading in various directions until you find the one you like best.

Different light-to-dark progressions can make a big difference in how your quilt will look. Having the lightest fabric in one unit against the darkest in another unit can create a nice glow. Take another look at Star Sapphire to see how this can work.

For more detailed information on fragmenting, coloring fragmented designs and creating templates for each of the shapes, see pages 45 to 48 of my book, The Quilters Album of Patchwork Patterns.

For other examples of my fragmented quilt designs, take a look at Mayflowers, Summer Lily,  and Fabergé.  All of them are free pattern downloads!

3 thoughts on “Fragmenting: A Whole Quilt Design from a Single Block”